5 Limiting Beliefs That Are Holding You Back 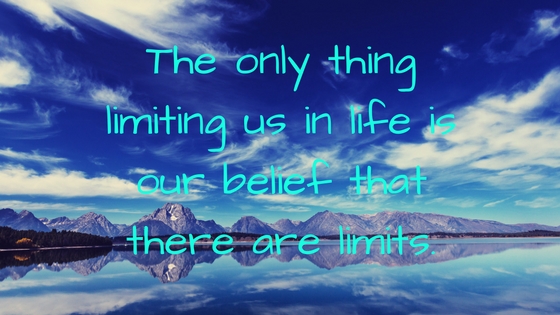 So you decide to follow your dreams and apply for your dream job, you know the one you did all that schooling for.  You know that you don’t necessarily have the hands on experience but you have earned your degree, maybe even two degrees in the industry that you want to work in.  You stalk the job boards daily looking for the perfect fit and one day you find it.  You submit your professionally drafted resume and cover letter for the position and you feel confident that you will be getting a call.  A few days go by and nothing, you start making up stories about why you haven’t received a call yet.  You tell yourself, “what was I thinking applying for that job, I know I am not qualified,” however you are qualified. A few more days go by and the stories that you continue to tell yourself have convinced you that you were crazy for applying for such a position; you feel like an imposter.

The next day you get the call you have been waiting for you.  They want to interview you the next day and you say yes! You are so excited and begin feeling confident again about your abilities to do the job.  You ace the interview and you just know they are going to make you an offer.  A few days go by and you get the call that they want to hire you and you accept. You are working in your new position for a few months now and your lack of experience is clear however the company has told you that they will invest in your development but for some reason you keep telling yourself these false stories about your abilities.  In the long run these stories and limiting beliefs stall your growth and you end up playing small, not reaching your full potential.  This story is not just made up, it’s actually part of my story.  I have now realized the limiting beliefs that held me back from truly excelling in what I thought was my dream career. I will share them here with you and hope that you will not allow these same beliefs or a variation of these beliefs to hold you back from playing full out in your life, career or business.

Five limiting beliefs to be aware of that if conquered can change the trajectory of your life.

Limiting Belief #1: I can’t ask for what I want because if I do I may be rejected or lose my job.

Fear of being rejected will keep you in a box and in a place of bondage mentally and physically.  In your mind you know what you need to be the best version of yourself but when you don’t speak up, you are suffocating the essence of who you are. You are not living your truth and everyone deserves to live their truth. This belief will keep you in a place that you don’t want to be in physically, like in that job that you hate, and because you won’t ask for what you want you suffer. Know that being rejected is just a belief, if you ask for what you need or want and the other party doesn’t give it to you that’s okay, they just simply don’t share in your belief to have what you need. So what do you do? You decide if you are okay with the outcome and if you aren’t okay with the outcome then you change it by seeking out that which will be in alignment with what you want.

Limiting Belief #2: I can’t truly be myself because if I do I won’t fit in with those around me. What will they think?

This belief is along the lines of not wanting to be rejected. I remember when I worked in Corporate America I felt like I couldn’t be my genuine self because those with more extroverted, aggressive or “bull dog” personality types were more commonly accepted. They were seen as being the ones who handled business, got things done and were confident. I knew that this was not me because I knew that I was more introverted and easy going. So in an effort to conceal my true self I tried to appear more extroverted and aggressive but that was a big fail.  I couldn’t keep that up consistently and because of the inconsistency it appeared that I was less confident and in doubt of my abilities. I have since learned that by not being my true authentic self I couldn’t produce my best work because I was so worried about how I should behave in different situations. The lesson here is to squash this belief by telling yourself that you are uniquely and wonderfully made and that the world needs your unique gifts.  Keep telling yourself this until you belief it. Don’t short change yourself by not being the totally awesome person that you are.

Limiting Belief #3: I can’t take on that new project or business idea because I may fail.

Okay, so since when has it been the end of the world to fail?  At some point in our life we are going to fail but that doesn’t mean it’s the end of the world. Some of the most successful people that we see today have failed at some point in their life. Oprah was fired from her first television job as an anchor, Walt Disney was fired by his former newspaper editor for a lack of imagination and Michael Jordan was cut from his high school basketball team. My point is that if these highly successful individuals can fail and bounce back up again so can you and I.  So take on that new project or start that business you have been dreaming of and do it afraid if you have to. Every time I write a blog post a small part of me gets scared because I wonder if what I am writing makes sense and I wonder if it will inspire anybody. But I have to remember that not everyone is for me and what I have to say but those that are, will read it. So move forward know that failing is not the end of the world just an opportunity to re-calibrate.

This is called the comparison trap, comparing your skills and abilities to those of someone one else who you think has it all together. Thinking like this will keep you stagnant and you will never reach your full potential.  Remember what I said earlier, you have unique gifts to offer the world.  And this applies here too.  In a way I see this limiting belief as true because you won’t ever be as good as whomever you are comparing yourself to because you are both different and have different talents and gifts that are expressed in a different way. Don’t get yourself caught up in this trap please, keep reminding yourself that you are the very best version of yourself.

Limiting Belief #5: What I have to say isn’t that important

This is you playing small not sharing your genius with the world because you believe your voice is insignificant. I also consider this not living your life out loud, allowing what everyone else has to say be more important than your own voice. I remember sitting in meetings at work wanting to speak up and say something but not saying anything because I believed everyone else’s voice was more important.  I began to realize however that my voice offered a different perspective and as my experiences in certain areas were different I needed to be heard. I learned that by not speaking I was dishonoring myself and not operating in my true worth. So know that your words can make a difference and cause people to think differently about a certain situation.

Pay attention to the lies that you tell yourself and do the opposite of what you feel scared to do. Remember that it’s okay to feel scared but do that which scares you anyway.  Each time you do this you gain more and more confidence in yourself and abilities. The moment we decide to get out of our own way is the moment we begin to start really living life. My challenge to you is to keep a journal each day of the limiting thoughts you have and after each one write an affirming statement to yourself to conquer those limiting beliefs.  You will feel liberated and alive!

I have created a resource just for you that will help you focus on discovering your limiting beliefs. Download my  FREE resource called the 7-Step Morning Manifestation Routine. This is my morning routine that I do every morning to get my mind ready for the world.  It includes the seven activities that I do along with a recommendation of resources to use to make your morning routine successful.

I am also offering a FREE 30-minute clarity session to help you create some clarity in your life about where your life is going.   In a nutshell I help women get their mind right so that they can lead a live they love and deserve. Reserve your time today by emailing me at kendra@kendrakaywoods.com.

This site uses Akismet to reduce spam. Learn how your comment data is processed.